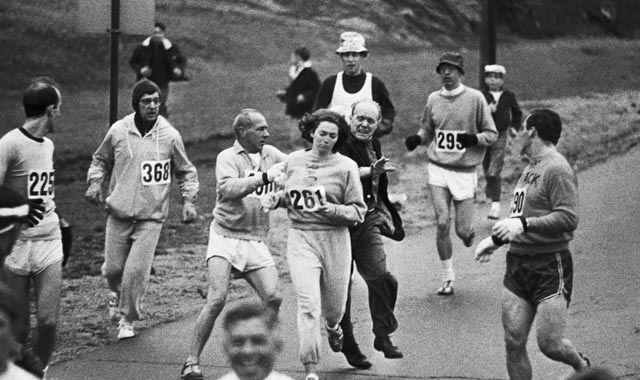 This famous image captured the moment Kathrine Switzer was attacked by Boston Marathon organizers in 1967 when they found out a woman was running the race.

During the 26.2 miles, she was physically attacked, and then, if that wasn’t enough to break her stride or focus, her boyfriend broke up with her…during the race. He’s the one on the right, in the dark shorts with meaty legs turning to look at what’s unfolding behind him.

Kathrine’s boyfriend punched one of the guys trying to stop her – then got mad at Kathrine because he feared he had just jeopardized his Olympic aspirations after hitting one of the race organizers.

No matter. Kathrine kept running. She ran all 26.2 miles.

Kathrine’s historic marathon finish happened six years and three months before I was born. There are many, many women running today who were alive when Katherine was being held back by men grabbing her sweatshirt, yelling at her to, “STOP RUNNING!” because they didn’t want a woman running alongside them.

A woman trying to run 26.2 miles in 1967 was a subversive act. Some could argue it still is. I don’t run streets I’m not familiar with – and often run with mace along the streets I know.

Writing was a subversive act for women as well. And reading. Again, many could argue it still is. Tonight, Senator Elizabeth Warren was stopped from reading a letter written by Coretta Scott King on the Senate floor. A female politician reading words written by a black female civil right activists in front of a room filled mostly with white males – that’s a binder full of subversion.

Voting. Running for office. Wearing pants. Using the F-word. Eating out alone. Traveling alone. Raising a kid alone. Seeing a movie alone. Doing anything alone. Getting angry. Yelling in public. Writing about sex. Having sex. Masturbating. Telling someone no. Not apologizing. Tattoos. Being a doctor. Being a lawyer. Being a judge. Being a CEO. Being a chef. Not being a mother. Not being a wife. Having a wife. Playing sports. Watching sports. Being a referee. Being a coach. Chopping wood. Working on cars. Racing cars. Joining the military. Flying planes. Weighing too much. Weighing too little. Not wearing makeup. Wearing too much make up. Boxing. Fighting. Fighting back. Earning more than your husband. Cutting your hair short. Being a priest. Being a scientist. Being an engineer. Taking calculus. Going to school. Going to college. Going to Harvard. Having a library card. Earning money. Having a bank account. Having a job. Being a police officer. Smoking. Driving. Dancing. Making art.

All subversive acts when female, at one time or another.

And then, somewhere along the way, there was a woman sick of the status quo and tired of people telling her not to do something who said, “fuck that,” and did it anyway.

In the coming months and years, I believe we will need to get more comfortable with subversion – “we” being the collective we who may not slide so easily into disruptive behavior. “We” will need to speak up when we hear untruths being passed around as facts. “We” will need to protect those who are being discriminated against because of their race, religion, sexuality or gender.

“We” will need to stand up for what’s right because that in itself is starting to feel like a subversive act.

So let’s settle in to being as subversive as we can – I’ll start. Tonight, I ran by myself in the dark. I sang Gwen Stefani and Alanis Morissette songs so loud that my daughter heard me from our driveway as I finished my run. My hair is cut short. I have three tattoos. I fight back when I can and I have had a library card since I was three. I’m a college graduate. My major was English Literature. My minor – women’s studies. I work. I vote. And, I use the F-word.

8 thoughts on “Running while female & other subversive acts”