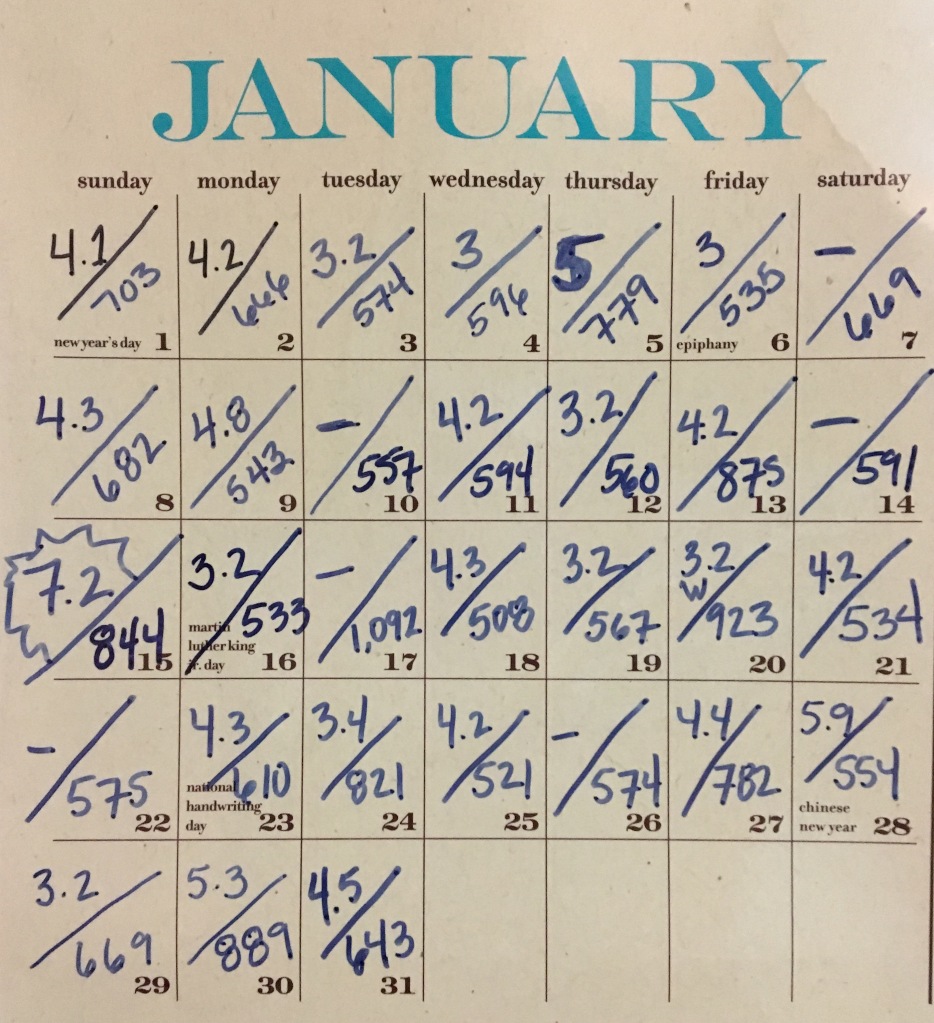 I’m not gonna lie – that calendar brings me a deeply satisfying, closing-in-on-smug, sense of accomplishment.

My running routine is steady. I never expected it to be a struggle. I’ve been walking or running three to five miles nearly every day for more than three years now. It’s my lithium.

But making time to write 500 words has not come as easy. I get it done, but it’s usually the last thing I do for the day. It’s 8:36 p.m. and I’m just now sitting down to write. Even here, as I type past 20.5K words so far this year,  I’m struggling to come up with anything worth posting. I keep checking the word count to see how many more words I have to write before I reach 500.

The whole point of this – 20 miles a week/500 words a day – is to attach my writing practice to my running, braiding them together so that if I’m doing one, then I’m doing the other as well. (That, and to have a welcome distraction from a news cycle that feels like a nonstop series of throat-punches.)

For January, my goal was simply to write 500 words a day. I ended up with 11 blog posts, one published essay on Grown & Flown and 10,293 words in a word document titled “Letters to Myself.” I use it for the nights when I have zero energy or ideas to write anything of matter.

Tonight would have been one of those nights as this post feels like I’m pushing a dead buffalo up the side of a rocky cliff. I’m tired, the kids are still up, the kitchen should have yellow police tape around it, and my husband just now got home from work.

I heard a quote from an author interview on NPR – I don’t remember what the show was, or who the writer was. I just know it was a female. She said there’s a saying that every child you have represents a book left unwritten. Talk about a throat punch, right?

But I get it – I get is so much, I wish I’d never heard the interview. Now I’ll always have that thought lurking, teasing me like the women who live in Charlotte Gillman’s yellow wallpaper.

As I try to write this, my son is running around making ninja-like karate chops and not brushing his teeth because I haven’t yelled it 27 times yet, but only said it twice. The second time was more of a question (“…have you brushed your teeth yet?”) so it doesn’t even count.

The dog is growling and wanting someone  to play with him. There is clutter everywhere in my house. Earlier tonight, I found a raw, hard-as-rock biscuit that had popped out of the can when I was making chicken pot pie three nights ago. I thought the dog had got a hold of it, but the hockey-puck piece of processed dough was hiding among groceries I still haven’t put away after taking them out of the bags the same night I made chicken pot pie.

Since starting this post – I’ve moved from the chaos of my living room to my bedroom so I could finish writing while my husband gets the kids to brush their teeth and go to sleep. I needed some uninterrupted space, but even behind a closed door I can hear the dog wanting attention. In the thirty minutes I’ve been in here – my son has knocked on the door to ask me where his zip-up pajamas are (in the dirty clothes hamper) and my daughter has opened the door twice to tell me good night. My husband wanted to know if the dog has been fed (yes) or walked (not yet).

A room of one’s own is a good idea, but Virginia was thinking too small. I need an entire 24-hours of one’s own – no distractions, no dog, no finding someone’s pajamas, no working on anything but a single idea – can you imagine? Giving your mind completely over to one single thought for an entire day?

The indulgence of it feels nearly mad.

“My brain hums with scraps of poetry and madness,” said Virginia on another day.

But no matter. One month down and I did what I set out to do. February is a short month – I think I can stretch out this goal another 28 days. And maybe even craft something more constructive with all these words I’m putting down – or, at the very least, write them before 10:30 on a Wednesday night.